The word "Tantra" means expansion of Consciousness. Tantra is a spiritual path with very ancient roots and, at the same time, fully updated to modern times and to the present reality.

Buddhism was born 2,500 years ago in Northern India. For 500 years, it spread all over the country in the form of the Hinayana or Small Vehicle. Around the I century A.C. the Mahayana revolution took place, the way of compassion and love, the way of Bodhisattvas.

During the II and III century, Buddhism merges with Tantra and imbues with its wisdom and meditative techniques, giving birth to the renowned Buddhist Tantra or Vajrayana.

Vajrayana means 'Diamond Way'. It is the fast way to the realization in one lifetime.

In India, Buddhist Tantra is driven by a spiritual movement known as 'the 84 Mahasiddhas', beings of great realization that combine spiritual practice with everyday life. Dharma comes out the monasteries to pervade life.

But it is on the VIII century, when Padmasambhava, the Tantric Buddha, appears. He disseminates and spreads the teachings of Buddhist Tantra in Afghanistan, Pakistan, India, but above all in Tibet.

In the same period, the Tantric civilization of the Chandelas emperors is developed in central India, in the area of Kajuraho. There, they combine the practice of Tantra with the 64 arts of classical India. Art and spirituality blend in perfect harmony with the sacredness of life. All activities done from the perspective of pure vision or "Ta Nang" become sacred arts.

Padmasambhava, known as Guru Rinpoche, strengthen the expansion of Tantric Buddhism throughout Central Asia and Tibet with the help of his 25 disciples.

Tantra contains the highest and secret teachings of Buddhism which are those that Padmasambhava spreads in Tibet. He establishes a unique system which allows the conservation of the purity of these teachings: the TERMAS or 'spiritual treasures'. These Termas were hidden in the earth, the rock, the waters, the space and the mind for the benefit of future generations. Every Terma will have a TERTÖN or 'discoverer of the spiritual treasure'. These Tertöns are already prophesied and are coming to this world, as avatars, with the mission of revealing the Terma. It allows this tantric tradition to keep all its purity and power without any degeneration or adulteration.

The Termas' system allows also a freshness of the transmission. Our teachings' lineage is called Tersar, which means 'new Termas'. New treasures revealed and adapted to the current time. The main Tertön of this precious teachings' lineage is Dudjom Rinpoche, Dudjom Lingpa in his previous reincarnation. This lineage is known as Dudjom Tersar. Almost all the practices we realize nowadays are spiritual treasures or Termas of these two Tertöns. At this time, the holder of the lineage is S.S. Shenphen Dawa Norbu Rinpoche, the son of Dudjom Rinpoche.

To Transform negative emotions into wisdom

TANTRA is the rapid way to realization adapted to the current time and society. While other paths require many lives to reach the goal of total Liberation, Tantra gives us instruments to achieve it in only this very life.

Tantra says: “there is no duality”. In the duality there cannot be Unity. Duality is just an appearance.

Tantra helps us to transform negative emotions into wisdom. Not escaping from emotions but transmuting them using Consciousness.

Tantra says: “Do not say anger is your enemy because it is the seed of compassion”.

ACCORDING TO TANTRA ALL IS SACRED – ALL IS DIVINE, nothing is profane. For this reason, in Tantra, Art becomes part of the Way. For a non-spiritual person, everything is profane.

Love is not a relationship, it is a state.

Love is not a product, it is a mind experience.

Love goes from inside to outside.

It is not a means, it is an end in itself: it is the beginning and the end at the same time.

The Bodhicitta or Compassionate Love is the Essence of Tantra. “Bodhi” means 'illumination' and “citta” means 'mind'. From the buddhist perspective, Love is inseparable from the mind of illumination.

LOVE IS TO BE IN OUR LIVES HERE AND NOW: death, love and meditation always happen in the present. This Love means entering in the awareness of the ETERNITY OF THE PRESENT.

Love is the easiest way to dissolve ego, for that reason selfish people cannot love. LOVE IS MEDITATION AND MEDITATION CREATES LOVE. Love is the offspring of meditation. Tantra has the power to transform our negative emotions in nectar. For that, in the Tantric Way it is possible to use the energy of desire and sexuality.

Male tantras work with the energy of anger, annoyance and violence, transmuting it into wisdom.

The practice of Tantra is adapted to our contemporary ways of living. Everything is integrated into our spiritual practice: our job and work relationships, femininity, motherhood, family, sexuality, friendships, art... The practice is to sacralize through Consciousness and Meditation all these facets of our lives.

The Way of Tantra is perfectly adapted to the reality of our Western societies.

The Way of Tantra is perfectly adapted to the woman and man of the XXI century.

TOWARDS A MEDITERRANEAN TANTRA

Tantra is not a religion, it does not have dogmas of faith

Tantra is not a religion, it does not have dogmas of faith. It demonstrated, along the history, a huge ability of adaptation to be practiced in different countries and cultures.

The first thing Padmasambhava did when he arrived in Tibet was to adapt the Indian origins' Tantra to the Tibetan culture and civilization. So, a Tantra full of shamanic influences was created, those that imbued the pre buddhistic tibetan spirituality. Practices as the Sang, the Sur, the Puja of Nagas o the Chöd have a deep shamanic influence.

Padmasambhava also started the translation of the Sanskrit Dharma to the new tibetan language, together with Yeshe Tsoyal and his 25 disciples. This helped a lot the spread of the Tantric practice and Dharma in the Tibet society.

Nowadays we are in a similar situation.

during the centuries is now expanding in the West

It is necessary to adapt this wisdom to our Mediterranean culture, which is different from the Tibetan or Anglo-Saxon cultures. We shall create our Dharma, that would imbue itself with our way of being, feeling and living.

Our Mediterranean culture is hugely rich: it could and must fuse with Tantra, so that it spreads and benefits all beings. 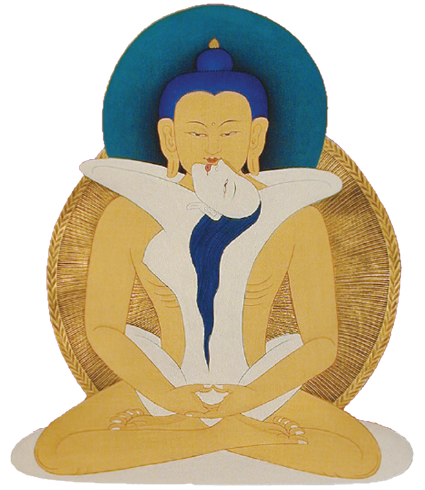 To adapt Dharma to our Mediterranean culture

To imbue our societies with the values of Dharma

With a total and absolute respect to the wisdom of the Dudjom Tersar Linage, Lama Djampa Gyatso and his team of practitioners are adapting Dharma to our way of being and thinking. New codes and new ways of doing are used, so that the wisdom could easier pervade our culture, our modern mediterranean society.

The work is centered mainly in the existential experience than in the accumulation of theoretical knowledge. Psychology, art, poetry, music, dance, partner relationships, sexuality, economy etc. are part of this process.

THREE APPROACHES ADAPTED TO OUR TIMES

To make Dharma really permeates Occident we shall adapt it to the actual needs and culture. To the growth of the Wisdom of Dharma different steps are needed:

Lama Djampa Gyatso proposes us to adapt Dharma Teachings to our Mediterranean culture through the development of three fundamental aspects that interest and concern all of us:

1) Art and spirituality or Dharma Art

it means using art as vehicle towards wisdom. It is the unity of art and consciousness.

2) Economy and spirituality or buddhist economy

Our Sangha is the driving force of initiatives that aim to transform the economy and the world today, to set a good example of how another way of understanding economy is possible.